The Bagatelle was originally just a small house bought by the Maréchal d'Estrées in 1720. Soon afterwards transformed into a luxurious small castle, it turned into an extremely costly folly. Christened "Bagatelle", it was to become a location for festivities and a hunting meet. Miraculously spared during the Revolution, Bagatelle experienced several fates: as a restaurant in 1797, then as a hunting meet under Napoléon, the estate being returned to the family of Count d'Artois under the Restoration. Bagatelle was reborn when it was bought by Lord Seymour in 1835. With the addition of a grand entrance on the park side, an orangery and new stables, the park was extended then transformed into the Jardin Napoléon III in the second half of the XIXth century.
-Bois de Boulogne, Sèvres-to-Neuilly road, 75016 PARIS
-Metro: Porte Maillot
-Bus: 244 & 43 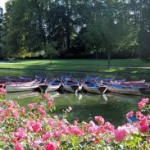 Originally called Vilcena; the Bois de Vincennes is the remains of the ancient wooded belt which surrounded Lutèce. Formerly part of the Bishopric of Paris, it became the property of the crown in the XIth century. The building of a strong castle with a dungeon which is still visible, was begun by Philippe VI, followed by Jean le Bon and was finally completed under Charles V in 1370. The enclosure and the chapel were only completed under François I. Most of the kings of France played a part in constructing the royal estate at Vincennes. During the One Hundred Years War, and continuously during periods of upheaval, the forest served as a source of firewood for Parisians.
-Portes de Vincennes & Dorée, 75012 PARIS
-Metro: Porte Dorée
Parc Floral de Paris 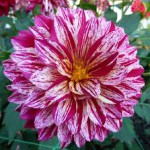 Held in 1959 and in 1964, at the CNIT and La Défense, the first two flower shows were immensely successful. In order to host the IIIrd International Flower Show in 1969, the Paris authorities approved the addition of a park in the Bois de Vincennes. The Parc Floral was located in the exact places where the former Pyramide and Cartoucherie military establishments stood. Some buildings, representative of Second Empire industrial architecture were thus safeguarded and renovated. In the same spirit, the Park's landscape architects retained a three-hectare pinewood forest of Larico pines. In the Bois de Vincennes, which was so dear to Saint-Louis, an oak grove covering a hectare symbolises the popular imagery of the good king giving justice under an oak tree.
-Esplanade du Château, Bois de Vincennes, 75012 PARIS
-Metro: Château de Vincennes
Jardin du Luxembourg 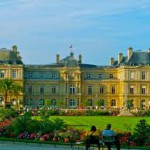 Considerably expanded following various acquisitions, gardens by Boyceau mixed the typically French embroidery of flower beds with Italian-style grottoes and fountains, which have now disappeared. As a memento to this lavish past, the Médicis fountain, attributed to Salomon de Brosse, was erected in 1861 along the rue de Médicis. Its pediment with Marie de Médicis' coat of arms supported by allegories of rivers and large bowls, contributes to making this a highly sought-after spot by tourists in the hot summer days.
-Boulevard Saint-Michel, 75014 PARIS
-Metro: Odéon
-RER: Luxembourg
Jardin des Plantes 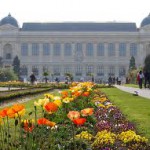 The garden was created following the completion of the work of XVIth century botanists. In 1577 the apothecary Nicolas Houel founded the Maison de la Charité Chrétienne (House of Christian Charity) with a "garden of simple plants", the first botanical gardens in Paris. By 1624 over one thousand species were cultivated here.
-57, Rue Cuvier, 75005 PARIS
-Metro: Austerlitz – Jussieu
Jardin des Tuileries 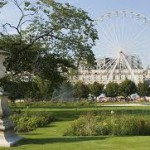 The Jardin des Tuileries occupies an area of 25 hectares, between the Carrousel du Louvre and the place de la Concorde, the rue de Rivoli and the banks of the Seine. It was commissioned by Catherine de Médicis but the present layout of the formal garden (1664) is attributable to Le Nôtre. The two terraces which form the north and south borders, blossom out into wide sinuous slopes in front of the place de la Concorde. The northern (Musée du jeu de Paume) side is dominated by the terrasse des Feuillants, named after a neighbouring Benedictine convent. It was here that the salle de Manège which received the Assemblée Nationale in 1789 rose up followed by the other revolutionary assemblies. The garden's sculptures are extremely varied with contributions from Marly, Van Cleve, Coustou, and Le Paultre. There are two illustrious buildings - the Orangery and the Musée du Jeu de Paume. This prestigious area is also a place where children congregate, taking part in gardening, painting, sculpturing and modelling work groups. Other attractions include a traditional merry-go-round, donkey rides and small boats for hire. Every year between 21 June and 25 August a fun fair is held with the big wheel towering over the rue de Rivoli.
-Rue de Rivoli, 75001 PARIS
-Metro: Palais-RoyalParc Monceau 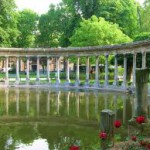 In 1769, the Duke of Chartres, the future Duke of Orléans, bought a hectare of land in the heart of the Monceau plain. This was to be the modest beginning of the Duke's folly. A pavilion was built in the centre of a garden which the duke, who later became Philippe Egalité, was to expand by 12 hectares between 1773 and 1778. In 1860 the park covered a much greater area than at present. During the Revolution, the park having been declared national property became a location for balls and popular celebrations. It was returned to the Orléans family during the Restoration. Then in 1852 it was split, half being given to the state and half to the Orléans family. The City of Paris bought the park in 1860. Part of it was made into a public garden by Baron Haussmann and was opened in 1861 by Napoléon III.
-58, Boulevard de Courcelles, 75008 PARIS
-Metro: Monceau
Parc Montsouris 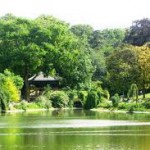 Originally called Moquesouris (mouse mockery) not without cause as the abandoned windmills of the barren plain were devoid of grain - even for the mice. A place of legends where the giant Isoire was supposed to have confronted Guillaume d'Aquitaine. At the end of the XVIIIth century, the labyrinthine subsoil inherited from the Montrouge mines, were transformed into catacombs. Bones from former Parisian cemeteries are piled up here. A vast formal park, developed during the Second Empire, was part of a plan thought up by Napoléon III and Baron Haussmann to give the capital large green areas at its four cardinal points.
-Boulevard Jourdan, Avenue Reille, 75014 PARIS
-RER B: Cité-Universitaire
Parc des Buttes Chaumont 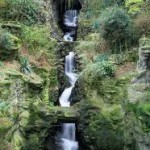 Situated on an arid hill, it has been the scene of bloody fighting. In 885, the Count Eudes de Paris et de Troyes drove back the Normans at the battle of Montfaucon on the hillside. In 1814, at the end of the French campaign, the National Guard and the marine artillery fought a desperate battle against the assaults of the Prussians before surrendering. It has also witnessed some macabre scenes. At the end of the Middle Ages, the infamous Montfaucon gallows, immortalised by the poet François Villon in his famous Ballade des pendus, were still to be seen on its western side. During the Restoration, the hill, which had been occupied by lime quarries since time immemorial, was turned into a vast public waste ground. When the communes of Belleville and La Villette were absorbed into the capital and the quarries were bought in 1862 by the City of Paris, Napoléon III had the idea of creating the Butte-Chaumont Park which was to become a monument to plants.
-Rues Botzaris, Manin, 75019 PARIS
-Metro: Buttes-Chaumont
Parc Georges Brassens 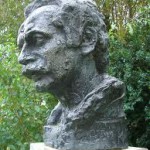 The site of the Parc Georges Brassens once belonged to the former hamlet of Vaugirard which became part of Paris in 1860. This is where the famous Périchot grape was grown in the 18th century. In the 19th century the vines disappeared and were replaced by market gardens. In 1894 slaughterhouses were built here. After many years of heavy use, they became outdated and were destroyed in 1974-1975. Opened to the public in 1984, the park was given the name of the celebrated poet and musician Georges Brassens who lived close by at 42 rue Santos-Dumont. The neighbourhood was also home to other celebrities, such as the sculptor Ossip Zadkine and the painter Fernand Léger. The park's clever design integrates some of the most striking architectural components of the slaughterhouses whilst giving the gardens a strong contemporary feel.
-Rue des Morillons, 75015 PARIS
-Metro: Convention
Parc André-Citroën 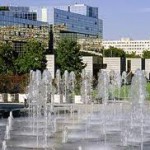 In the 18th century, the hamlet of Javel belonged to the omnipotent Abbey of Saint-Geneviève-du-Mont. Although it became part of the commune of Issy-les-Moulineaux in 1789, the area only became part of the 15th arrondissement during the Second Empire. Javel at the time was known for its open-air café and for the manufacture of chemicals, started up by the Count d'Artois in 1784. It was here that bleach was invented, hence its French name eau de Javel. In 1915, André Citroën built his factory close to the banks of the Javel and this continued to operate until the 1970s at which time car manufacturing was moved outside Paris. The twenty-three hectares which were thus freed up and were included in the capital's urbanisation policy gave rise to the Parc André Citroen. It pays homage to the famous manufacturer who devoted his life to major national causes. Over a vast area of fourteen hectares the park perpetuates the tradition of the prestigious parks of Paris which are designed perpendicular to the Seine such as the Champ de Mars and the Trocadéro gardens.
-Quai André-Citroën, 75015 PARIS
-Metro: Bir-Hakeim
Parc de Bercy

In June 1994, the first part of this park located on the former Bercy wineries was opened to the public. This space, offered to the public by the City of Paris, was essentially made of lawns accessible round the clock as an extension of the Paris Bercy sports centre. The second phase of the park was completed in autumn 1995 and covers almost five hectares including flower beds and the western part of the romantic garden. After the completion of the eastern part during the summer, the garden will reach its final area of about 14 hectares. The main elements of the site were preserved when the design of the park was worked out: century-old trees, essentially plane trees and chestnut trees; paved lanes previously used to transport the wine from the river banks to the wineries, four buildings already existing on the site : the Bercy Pavilion, a house of gardening, the lake house and the orangery.
-Rue de Bercy, Paul Belmondo, Joseph Kessel,
-Quai de Bercy, 75012 PARIS
-Metro: Bercy
Bois de Boulogne 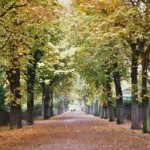 Wide open paths, horse-riding trails and sports fields are a few of the highlights in Bois de Boulogne, west of Paris – without, of course forgetting the Jardin d’Acclimatation’s well-kept secrets. The “storm of the century” on 26 December 1999 is now little more than a memory, and won’t stop you admiring this forest’s seemingly endless variety of trees. Oak trees cover about 50% of what was once the Forêt de Rouvray; and cedars, plane trees, ginkgo-bilobas and countless other species share the rest. Sportier visitors enjoy walking down the long tree-flanked alleys, and exploring the 28 km of horse-riding trails and 15 km of cycling paths (including a 9.2- km discovery track and a 3.6-km-long loop around Longchamp racecourse). More romantic guests enjoy canoeing on the Lac Inférieur, and fishing in the quiet waters of the many other lakes and ponds.
Jardin d’Acclimatation